Arguments that improved developmental levels are crucial for combatting economic crimes, such as money laundering, was critical to the Sustainable Development Goals’ (SDGs) inclusion of target 16.4. Target 16.4 seeks to ‘significantly reduce illicit financial and arms flow…and combat all forms of organised crime’. This inclusion, which aligns with and facilitates the Financial Action Task Force’s (FATF) aim of curbing money laundering, underscores the assumption that countries that are unable to meet their developmental targets are restricted in their efforts to achieve the SDGs. However, it is critical to examine whether countries with stronger developmental levels are better able to comply with the FATF’s standards.

Engaging secondary quantitative analysis, this paper appraises the anti-money laundering (AML) compliance levels of 37 African countries (ACs) and 5 emerging economies (EEs), the BRICs.[1] Against this backdrop, it interrogates the correlation between critical development indices and compliance. Firstly, it contends that the quality of domestic regulatory framework, which is indicative of a strong developmental trajectory, has direct correlation with their FATF compliance levels. Secondly, it refutes the baseline position that stronger developmental indices translate to improved compliance levels, arguing instead that the developmental indices of certain countries are immaterial to their compliance levels. It is imperative to state that reliance is placed on reported FATF data, human development and democracy index data. So there are concerns about data inaccuracies which is subject to selection bias.

Pre-conditions for effective AML regulations such as sturdy laws, reputational concerns and consistent enforcement strategies serve as a measure for the quality of each country’s domestic regulatory framework. Scholars have argued that the quality of a country’s domestic regulatory framework, which is indicative of its economic development is directly correlated with its FATF compliance. This is backed by a statistical appraisal of the compliance reports on ACs/EEs from 2007 – 2015 which reveals that only 7 of the 37 ACs assessed record over 50% compliance levels. Yet, the BRICS recorded over 55% compliance levels, with China and India towering at 66%. 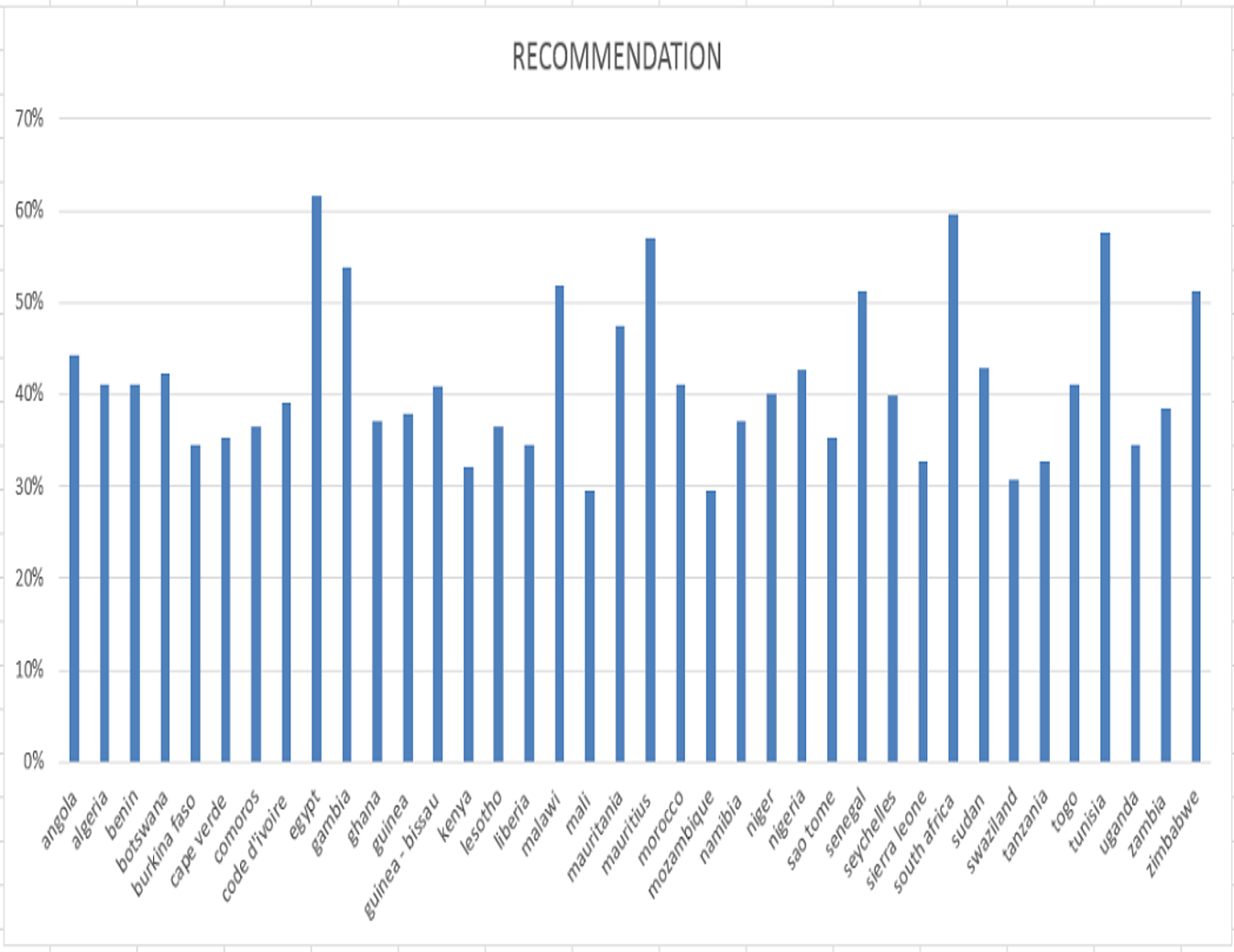 Figure 1. Technical Compliance Levels of African Countries to the FATF Recommendations (Derived by Author from the FATF’s countries MERs/follow up reports)

Figure 2: Technical Compliance Levels of the BRICS to the FATF Recommendations (Derived by Author from the FATF MERs/follow up reports of countries)

An examination into the compliance discrepancies reveal that, apart from the compliance head start given to the BRICS as belated core FATF members, a position that no ACs hold, the BRICs have a more sophisticated financial system, an advanced regulatory framework, more resources and the required expertise to facilitate compliance.[2] The BRICS indeed have the pre-conditions necessary to foster improved and targeted compliance, a base ACs were lacking. This indicates that the more economically developed countries were, the better their abilities to combat economic crime and corruption, particularly where their external reputation is aligned to their political will.

ACs are negatively impacted by their compliance deficient. It places them in a quagmire of consistent sanctions for non-compliance, a situation that hinders their global financial integration efforts. This has led to arguments, particularly from global south scholars that the FATF’s standards, processes and ratings are not cognisant of their challenges or domestic agenda. A relatable example is the ill-juxtaposition between the financial inclusion agenda of ACs and the financial integrity agenda of the FATF that mandates strict customer due diligence requirements. Dr Joy Malala argues that firm adherence with the relevant FATF standards to attain suitable compliance levels may lead to a regulatory paradox that undermines their compliance prospects. This illuminates the position that assessing all countries to the same standards irrespective of their challenges may be setting ACs up to fail.

The compliance trajectory of ACs/EEs indicates that economic development should be concerned with economic crime. However, using the Pearson correlation coefficient to examine the ACs/EEs compliance levels pitched against two developmental indices; democracy and human development index, conflicting findings are uncovered.

ACs reveal a positive correlation between democracy and their compliance with the FATF standards – meaning that countries with more democratic governments are better able to comply. 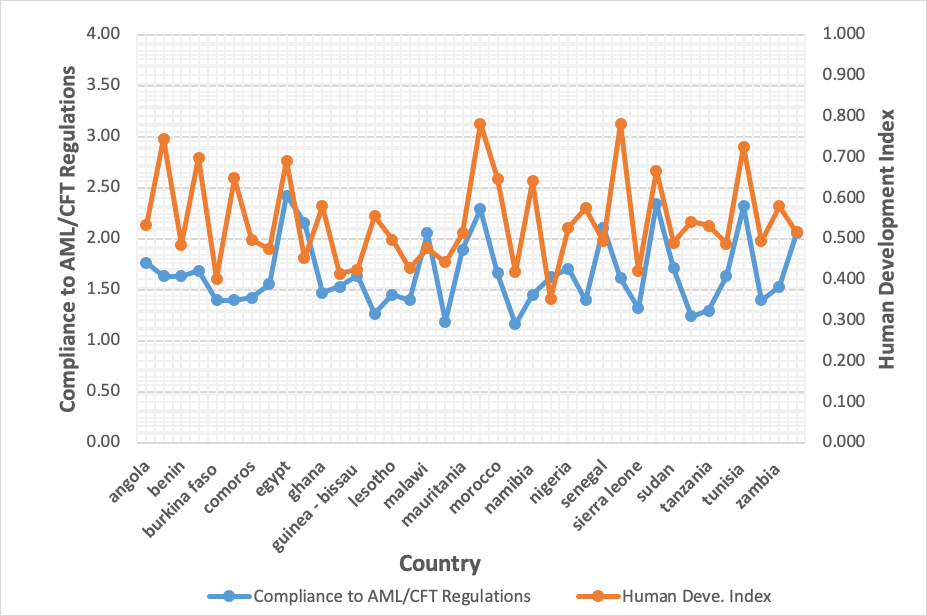 However, there is a stark difference with EEs which muddies the waters on the impact of development on economic crime control. Democratic countries do not necessarily have higher compliance levels. This is mainly demonstrated with China and Brazil’s variables. 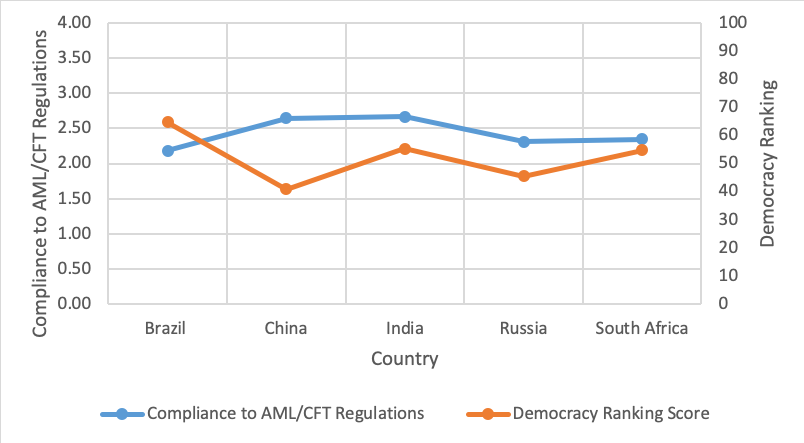 More so, where there is weaker compliance, there is stronger HDI. This indicates that other variables, such as corruption, come into play in determining HDI levels.

A holistic acceptance of the statistics may occasion arguments that development should not be concerned with economic crimes. This is particularly because of the strong compliance trajectory of EE’s even in the face of questionable development indices.

Nevertheless, economic development cannot be completely disassociated from financial crimes. Reports indicate that 20 -40 % of development assistance funding which amounts to $20 - $40 billion are stolen annually. Yet 1.4 trillion dollars is required to achieve the SDGs yearly. Such embezzlements which usually occur through high level corruption undermines attempts curb inequality, ensure quality education and good health amongst other SDGs. An indication that whilst the struggle to raise developmental funds heightens, a substantial part of existing donor funding is misappropriated thereby undermining the projected attainment of the SDGs. This denotes that reducing economic crime is critical to development.

In conclusion, this paper has shown that the quality of the domestic regulatory framework, which is indicative of economic development has proved critical to improved AML compliance. However, it finds that the developmental indices of certain countries are immaterial to their compliance levels. Nevertheless, this paper argues that economic development cannot be divorced from economic crime, and for this reason, it is paramount for the SDGs to give this the attention it deserves.

[1] Author derived dataset through an appraisal of the compliance levels of 37 ACs detailed in their FATF Mutual Reports (MERs) and Follow up reports dated from 2008 – 2015. Compliance levels accorded on each recommendation was recoded into numbers for quantitative analysis.