Global Value Chain Development (GVCD) has been enthusiastically promoted by the WTO and the Bretton Woods Institutions in recent years. The approach is seen to address the omission from the failed Doha round of any serious discussion of commodity dependence or issues stemming from major restructuring of production and trading systems for tropical commodities. The WTO and World Bank have presented GVCD as a panacea for addressing unemployment and labour standards, technological upgrading, female empowerment and wider industrial development for countries to diversify away from primary commodity export dependence.

Implicit in the rationale for GVCD is an understanding that economic development is hindered by continued dependence on primary commodity exports because the productive activities associated with these exports tend to be low value-added. This is taken as received wisdom with no reference to earlier debates around commodity dependency and the nuanced explanations for the tendency towards a secular decline in the terms of trade for primary commodities. These debates, originally put forward by Raúl Prebisch and Hans Singer, included the role of concentrated market structures and MNC control over trade in placing downward pressure on primary commodity prices for exporters in the Global South.

Commodity dependency remains a key concern for the global south. For example, 89% of countries in Sub-Saharan Africa (SSA) remain commodity dependent (with primary commodities accounting for more than 60% of exports). For many countries in SSA primary commodities comprise between 80 and 100% of total merchandise exports. (UNCTAD 2019) GVCD in the context of SSA has thus been interpreted as ‘Resource Based Industrialisation’ or ‘Making the Most of Africa’s commodities’ – that is, the upgrading of economic activities from primary production towards processing and the export of semi-processed products such as beneficiated metals and processed agri-food that allow for the ‘capture’ of higher value activities.

This blog considers two aspects of the contemporary dynamics of commodity dependency, namely commodity price dynamics and the political economy of industrial policy in African nations, that have largely been ignored by GVCD proponents. These dynamics critically condition the extent to which such an approach is meaningful in the context of SSA.

The United Nations Economic Commission for Africa’s 2013 report titled “Making the Most of Africa’s Commodities: Industrializing for Growth, Jobs and Economic Transformation” emphasises the imperative for African economies to industrialise as well as outlines a programme of resource based industrial development  (RBID) that makes the most of linkages in both soft and industrial commodities. The prolonged commodity price boom between 2002 and 2008 and its rapid recovery between 2010 and 2012 created conditions of optimism that RBID could be successful in SSA. By 2012, the so-called “commodity supercycle” had come to an end. Prices across all commodity groups have been falling or stagnated. The issue of commodity price movements is mentioned just once in the 2019 GVCD report in relation to its impact on the cost of inputs in GVCs. Falling and volatile commodity prices challenge the prospects for GVCD in commodity dependent economics as contractions in export earnings critically constrain the availability of funds to finance industrial upgrading.

Commodity price dynamics over the last 20 years have been driven both from increased demand from China for industrial inputs and the financialization of commodity markets and corporate strategy of international commodity trading houses. Along coffee value chains, for example, international trading companies have routinely engaged in speculative trading alongside their hedging activities on international commodity exchanges. In this way, trading firms can profit from prices increases and falls. Recent studies have also shown that, owing to the trading practices of trading houses, price increases on international commodity markets are not as readily transferred to commodity producers as price falls. Various financialised practices of lead firms have affected a squeeze on commodity producers that seriously limit the extent to which surpluses from productivity gains can be reinvested into industrial upgrading.

With the end of the so-called supercycle many mineral prices have fallen significantly. The economic downturn associated with the Covid-19 pandemic has seen commodity prices dip further. Mining investment and mineral rents have declined to pre-2002 levels. These trends have serious implications for policy in commodity dependent African states both in terms of depleted financial resources to fund industrial policies; and the implication of these trends on relations and bargaining between mining companies, states and communities and the ways in which this impacts on social and economic development at local and national levels.

The program of GVCD as espoused by the WTO and the other Bretton Woods institutions neglects the nature of the political economy of industrial development in commodity dependent economies that shape how GVCD manifests on the ground. The prospects for GVCD will depend upon the specific historical institutional context of individual commodity dependent countries.

Commodity dependent economies in SSA owe their economic structures to their colonial legacies. In the 1960s and 1970s a number newly independent nations in SSA embarked upon industrial diversification and development programmes that were funded by the direct income from surplus producing sectors, and external borrowing based on anticipated income from exports, namely the colonial commodity sectors. The oil price shocks of the 1970s and the rapid fall of commodity prices sent economies in SSA into a debt crisis that forced states to abandon programmes of industrial development as part of structural adjustment. The continued commodity dependency has shaped the prevailing political economy in these economies which places challenges and opportunities for GVCD that are specific to individual economies.

Industrial policy in apartheid South Africa, for example, involved creating strong backwards and forwards linkages with mining, much like that advocated by an RBI strategy. But this was driven by the political economy of the period in which economic power had been concentrated in the hands of English colonial capitalists whilst the Afrikaaner nationalists held political power. Rapid industrialisation around mining served to consolidate Afrikaaner economic power and thus erode the disjuncture between economic and political power whilst creating an economic structure that was skewed towards heavy industry connected to mining.

The democratically elected South African government of 1994 inherited an economic structure that was highly skewed with limited capacity to absorb labour. In spite of the involvement of scholars who would become prominent in the GVCD debate in policy discussions during the period of transition from 1992-1994 (Raphael Kaplinsky was co-director of the Industrial Strategy Project that published “Improving Manufacturing Performance in South Africa” in 1995 that also included a number of other authors who would go on to be leading proponents of GVCD in SSA over the last decade), and the favourable conditions of the 2002-2008 commodity price boom, the economic landscape of South Africa was marked by the absence of industrial policy in general, and GVCD type interventions in particular. This reflected the interest of South African capital to financialise and internationalise the economy that favoured the neoliberal macroeconomic policy framework adopted by the South African Government as part of the Growth, Employment, and Redistribution (GEAR).

A crisis of unemployment and worsening inequality in South Africa saw the election of Jacob Zuma with the promise of a more interventionist government modelled on the developmental states of East Asia. From 2008, industrial policy was back on the table with the adoption of the National Industrial Policy Framework (NIPF) and subsequent Industrial Policy Action Plans (IPAP) with the explicit aim of job creation. South African scholars have been leading in advocating for GVCD as an industrial strategy since the 2000s. Countless GVC analyses have been conducted on numerous sectors in South Africa from textiles to automotives, agro-food to paper and pulp. And many of these scholars are well known and influential in policy circles. In spite of this, the term “value-chain” features prominently in the IPAPs only from 2013/14, after the period between 2002 and 2008 when the conditions for successful GVCD through beneficiation and high valued agro-food processing were arguably more favourable.

It is interesting to observe also that the rate of inclusion of “value chain” or “value chains” in the IPAPs follows a similar trend to the term “regional” (see figure 1). Between 2010 and 2016, 23% of mergers and acquisitions by South African corporations were in SSA compared with just 4% in the mid-1990s. In 2017, exports to the rest of Africa amounted to more than to the EU, US or China. In 2015, the Industrial Development Corporarion (IDC) of South Africa implemented Project Evolve with the purpose of prioritising industries in South Africa for investment funding that has downstream industrial development opportunities, especially into markets in the rest of Africa.  In this context, the apparent wholesale adoption of GVCD in terms of regional integration can be seen as servicing the interests of South African capital by facilitating South African value chains into the rest of Africa whilst harnessing the development discourse of the GVCD approach (Carmody 2017).

The brief discussions in this blog post highlight critical aspects of the contemporary dynamics of commodity dependence that challenge the optimism of the GVCD approach as espoused by multilateral development agencies and the WTO. Moreover, it raises further questions on the political economy of commodity dependency and industrial policy in SSA that deserve attention. The period from 2002 until 2012 has seen a range of policy responses from commodity dependent economies in SSA from the rise (and fall?) of resource nationalism, to the absence of industrial policies leveraged by commodity export earnings, to the instrumentalization of regional GVCD to serve nationalist interests.

The 2019 GVCD report pays no attention to the experiences of national policy making and how this critically conditions the prospects for GVCD in different spatial and temporal contexts. How has the boom and bust in commodity prices since 2002 shaped the political economy of industrial policy in SSA and what does this mean for future prospects for economic development? If the gate keepers of development wisdom, the multilateral development agencies and the WTO, were serious about economic development in SSA, these are the questions that need further investigation. 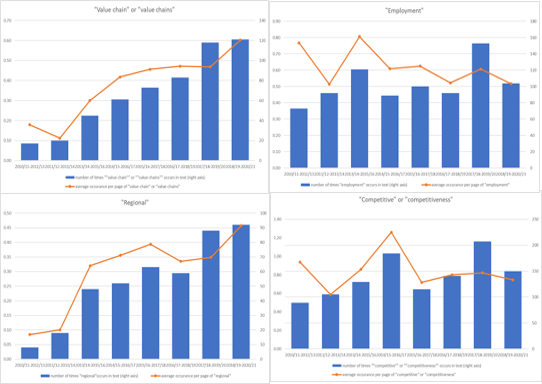 Figure 1.Number of times the words “value chain” or  “value chains”, “employment”, “regional”, “competitive” or “competitiveness” appeared in the  Industrial Policy Action Plan for South Africa from 2010/11 to 2018/19. The words competitive and competitiveness have been included as they have been central orienting concepts for GVC analysis and associated policy.