The Time and Gender of GVCs: 3 Critical Points on the GVC & Development Report 2019

Concerns over employment in Global Value Chains (GVCs) have risen in recent years, particularly following the 2008 financial crisis. This has led to the publication of a number of reports by international institutions, on the possible labour impact of chains. Some of these reports insist on win-win scenarios, where GVCs are supposed to promote growth whilst also leading to poverty reduction. The World Development Report 2020, for instance, hardly highlights the many points of tension linked to GVCs-based capitalism, despite decades of studies indicating the very fragile type of transnational business relations and employment it relies on (a critique by Leyden and Selwyn can be found here). On the other hand, the WTO GVC Development Report 2019 seems to suggest a more cautious approach to the issue. In particular, the report recognises the skills-polarising effects GVCs had on employment, and the missing link between rises in low-skill employment and real wages, theorised on the basis of classical models of international trade. In the executive summary, David Dollar openly acknowledges that comparative advantage and the Stopler-Samuelson theorem (arguing that international trade leads to convergence of the prices of production factors - wages in the case of employment) may not really work that well in developing regions. Indeed, his statement acknowledges a truth that has been recognised by many others for some time.

Despite its concessions, however, the report’s take on employment remains limited by a number of in-built inaccurate assumptions regarding: the linearity and temporality of employment gains and pathways in GVCs; the nature of skills and skill-formation; and the type of wage gains needed to sustain workers’ livelihood meaningfully in developing regions. In this short commentary I briefly raise three critical points against the assumptions at the basis of this report. I discuss the temporality of employment in GVCs; the gendered construction of skills and employment disadvantage; and the need to move the debate from individual wages to social wages in order to truly assess the ‘reproductive’ - or more simply, livelihood - implications of GVCs employment on labouring classes.

In developing these arguments, I rely on my long-term field research experience in studying Asia’s garment and textile value chains and their labour relations, standards and practices, while I also benefit from the insights of decades of feminist political economy research around the unevenness of the development process. In a post COVID-19 world, attention to these issues, shaping employment in GVCs will become even more pressing, given the dis-integration of many GVCs witnessed during the pandemic, and the likely further raise in labour insecurity within them.

While accepting the problematic nature of some employment outcomes in many global circuits, the 2019 WTO GVC Development Report still assumes the presence of linear benefits from involvement in GVCs production and trade. Crudely put, the report argues that the current organisation of production and trade in GVCs still remains a broadly positive scenario, based on employment generation. There is simply the need to correct GVCs tendency towards skill-polarisation and low-skill bias. In fact, the report admits that GVCs’ beneficial effects seem to primarily favour those with better jobs, and may not – do not - manifest for workers with lower levels of skills. GVCs employment remains largely preferable to informal economy alternatives, but skills upgrading may be necessary.

However, employment issues in GVCs can hardly be merely ascribed to skill-polarisation. First, arguably, across the many labour-intensive industries forming the backbone of GVCs-based capitalism, high levels of labour precarisation may systematically prevent skill-formation. That is, the problem does not lie with skills, but with the lack of time to acquire them. GVCs employment is a very short-lived experience for many workers. In sectors like garment and textile, evidence from countries like Bangladesh or India suggests that many workers are out of GVCs by the time they are 30-35 years of age.

Secondly, after being employed in GVCs for a maximum of 10-15 years, many of these workers may simply go back to informal economy jobs. This means that GVCs do not set different employment pathways. They merely represent a temporary phase in a longer work pathway where labouring classes experience different forms of precarity, within and outside GVCs. Evidence from India suggests that former garment workers may return to the same informal jobs they were performing before joining GVCs. While in some cases they may leave GVCs factories with some savings, in many others they do so with varying levels of debt. Obviously, these outcomes may not be due to GVCs employment at all, but rather to the features of precarious living in many developing contexts. We shall not fall in the same ‘cake-division fallacy’ of many global commodity studies, which assume that all development outcomes are dictated by the participation in GVCs. However, at the very lest we can conclude that GVCs employment is hardly a game-changer for workers in developing regions. The short temporality of employment in GVCs further limits the purchase of comparative advantage arguments, by revealing structural limitations that go well-beyond low-skill traps.

Point 2 – The social construction of skills and GVCs

Somewhat surprisingly, the 2019 WTO GVC Development Report acknowledges that a large share of GVCs employment is composed of women workers. This point is welcome, as reference to gender is hardly mainstreamed within Global Governance and Financial Institutions, which explains why the development process still suffers from the same ‘male-bias’ denounced by Diane Elson three decades ago. The Report recognises that often women workers may not experience the potential benefits of GVCs employment, but it ascribes this problem to their initial incorporation into GVCs, based on lower levels of both assets and skills. To an extent, some of these assumptions may be true – for instance, women may enter employment in GVCs as landless workers or already in debt. However, this simply confirms that GVCs hardly ‘fix’ initial conditions of entry into labour markets, but they rather merely magnify ‘adverse incorporation’. In short, GVCs are not particularly ‘developmental’. On the other hand, they cannot ‘fix’ wages as wages are not determined by trade, but formed in labour markets that are gendered, racialised, and bearers of multiple inequalities.

Moreover, if we move our attention from assets to skills, the position of the report becomes far more problematic. The issue is not that women cannot reap the benefits of GVCs employment due their initial lower level of skills. On the contrary, women’s incorporation into GVCs is based exactly on their structural disadvantage and the gendered socially constructed nature of their representation as lower-skills workers. On the shopfloors I visited, women sat on the assembly line next to male workers, doing exactly the same job, but were paid significantly less because they are women. The lower wages paid to women are assets for both global businesses and local suppliers in GVCs, as they keep final prices down. This is the ‘comparative advantage of women’s disadvantage’. As women are often hired exactly because they are cheaper and more vulnerable workers – feminist economists like Stephanie Seguino have amply demonstrated how gender-wage gaps were used as a substitute for monetary policy to boost export in East Asia. Expectations that the same GVCs benefiting from their subordination may help fix it are naïve at best.

The final critical point I raise against the 2019 WTO GVC Development Report is that it remains stuck in a neoclassical static framework in which gains or losses are indicated with little reflection on initial conditions. For GVCs employment to be beneficial, workers should not merely experience one-off increases in wages. They should also experience improved livelihoods. Such improvements can only be tested against the totality of conditions of employment of GVCs workers. In the previous sections, I deconstructed assumptions on employment linearity and stereotypes about women’s work and skills in GVCs. Here, before concluding this short intervention, I want to move further, and discredit a whole model merely focusing on wage-movements for individual workers.

The question is: even if we observed wage increases in labour-intensive GVCs, could we talk about comparative advantage working for all? No, we could not. One-off wage-gains may not challenge at all the temporality of employment in GVCs, if they do not in turn restructure reproductive conditions of workers in industrial areas across the global workshops of the world. First, to meaningfully tackle improvements in employment conditions, discussions on wages should focus on living wages. Secondly, such living wages should always be assessed against the possibility for both workers and their families to make an industrial living. As things stand, this is hardly the case. Across ‘Factory Asia’, circular labour migration from China and India alone involves respectively almost 300 and 150 circular migrants every year; that is, the entire population of the United States. This is because industrial areas hosts millions of workers paid salaries far too low to allow them to bring their family with them. Hence, these stay back in rural areas, and workers eventually re-join them back and forth, endlessly regenerating precarious employment as a key feature of GVCs. 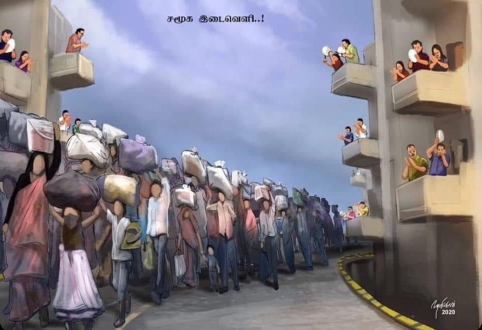 On the other hand, GVCs benefit from these massive reservoirs of footloose labour, which can be easily retrenched during economic crises. We had a bitter taste of this during the Global Lockdown, when millions of GVCs workers were left jobless instantly, as global buyers cancelled orders for millions of dollars. In countries like India, workers were also left to their own devices to return home. News channels across the world have broadcasted the images of a huge army of Indian migrant workers marching back home on foot. The Indian drawer Hasif Khan, has poignantly sketched the magnitude of this exodus of workers in his drawing Social Distance (above). Now: that army of workers in India and elsewhere – who make clothes; shoes; phones; tablets; computers and so much more for middle classes across our planet, in greatly precarious working arrangements, with minimal labour security and great risk exposure during crises - is what employment in GVCs really looks like. Perhaps, future reports exploring issues of work in GVCs should start from an acknowledgement of the utter inadequacy of international trade models - including their recent GVCs avatars - to capture the many issues experienced by workers labouring across the global economy. Obviously, the economic models criticised here do not cause working poverty. However, their misinterpretation of the concrete world of work continues diverting energy and resources away from more meaningful economic and policy debates.