Building an Economic Engagement Network Between Africa and the Caribbean

Africa and the Caribbean are forever linked by unbreakable bonds of history, culture and blood. However, economically we are literally and figuratively an ocean apart.

But how do we change this?

The connections that Africa and the Caribbean build and maintain between each other and with third parties are critical if both regions are to increase their economic interactions. To achieve this aim, it is argued in this paper that both regions need to build an Economic Engagement Network, inclusive of agreements and countries that optimize a unified African and Caribbean vision to seek greater global economic participation.

What is an Economic Engagement Network?

An Economic Engagement Network is the series of international agreements that a nation or bloc of nations has entered or seeks to enter into that will benefit its economy by creating the platform for more significant trade and investment. Central to developing the Economic Engagement Network is facilitating inter-connectivity to the rest of the world, allowing for the freer movement of goods, services, people, capital and data.

An Economic Engagement Network is about how nations can improve their competitiveness by finding and creating value through the complex interplay between the various agreements (e.g. trade, investment treaties, double taxation agreements, air service agreements, standards mutual recognition, etc.) that they enter between each other. This will require a total mindset change on the part of African and Caribbean policy makers, businesses and workers alike to view these agreements not in isolation but as networks and platforms that support global value chains. As the economist Richard Baldwin reminds us:

“The contours of industrial competitiveness are now increasingly defined by the outlines of international production networks rather than the boundaries of nations.”

As such, building an Africa-Caribbean Economic Engagement Network has to place within the context of modern production practices factoring in:

A nation’s development and prosperity are increasingly joined to its connectedness to the rest of the world. In today’s world of globalization, it is not sufficient to have market access or attract foreign direct investment (FDI); it has become necessary to turn that market access into market presence and use FDI to “catalyze or facilitate the accumulation of capabilities” within an economy; this is where an Economic Engagement Network comes in handy.

Most modern trade and investment are centred around global value chains (GVCs). Unfortunately, both Africa and the Caribbean have low levels of GVC participation. The Latin American and Caribbean (LAC) Region and it can be equally said for Africa has “low participation in global value chains, both in their percentage share and in the stages in which they are involved, which is mainly concentrated in exporting raw materials or derivatives.” Africa’s global share, according to the World Bank of GVC, participation between 2000 and 2018 has remained at a constant 3%. The LAC, for its part, is not doing much better at about 4%. However, an Africa-Caribbean Economic Engagement Network creates an opportunity for Africa and the Caribbean to rectify this and change their collective fortunes by creating, adding and capturing value to enhance the prosperity of both regions.

According to McKinsey and Company, due to the Covid-19 and for pre-pandemic reasons, “up to one-quarter of global goods exports – worth US$2.9 trillion to US$4.6 trillion annually – could feasibly shift to different countries in the next five years or so, though the potential varies considerably across industries.” Thus, the recovery period from the COVID-19 Pandemic is an opportune time for prioritizing an Africa-Caribbean Economic Engagement Network. An Africa-Caribbean Economic Engagement Network creates a framework to direct some of this potential shift in global goods export to Africa and the Caribbean. However, Africa and the Caribbean will have to build their productive capacity for this shift to be feasible.

Africa and the Caribbean have long had an ‘export or die’ mindset; however, it is not simply about exporting anymore in today’s globalized world, with its complex supply and global value chains. It is about using trade and investment to build one’s productive capacity. The United Nations Conference on Trade and Development (UNCTAD) defines productive capacities as “the productive resources, entrepreneurial capabilities and production linkages, which together determine the capacity of a country to produce goods and services and enable it to grow and develop.”

UNCTAD in its groundbreaking Productive Capacity Index (PCI), which is available as an online tool that allows “policymakers to measure their countries’ performance in achieving their national development goals, as well as their ability to meet the UN’s Sustainable Development Goals (SDGs),” establishes a clear link between higher Productive Capacity and both higher GDP and export diversification as illustrated in Image 1 and 2 respectively. 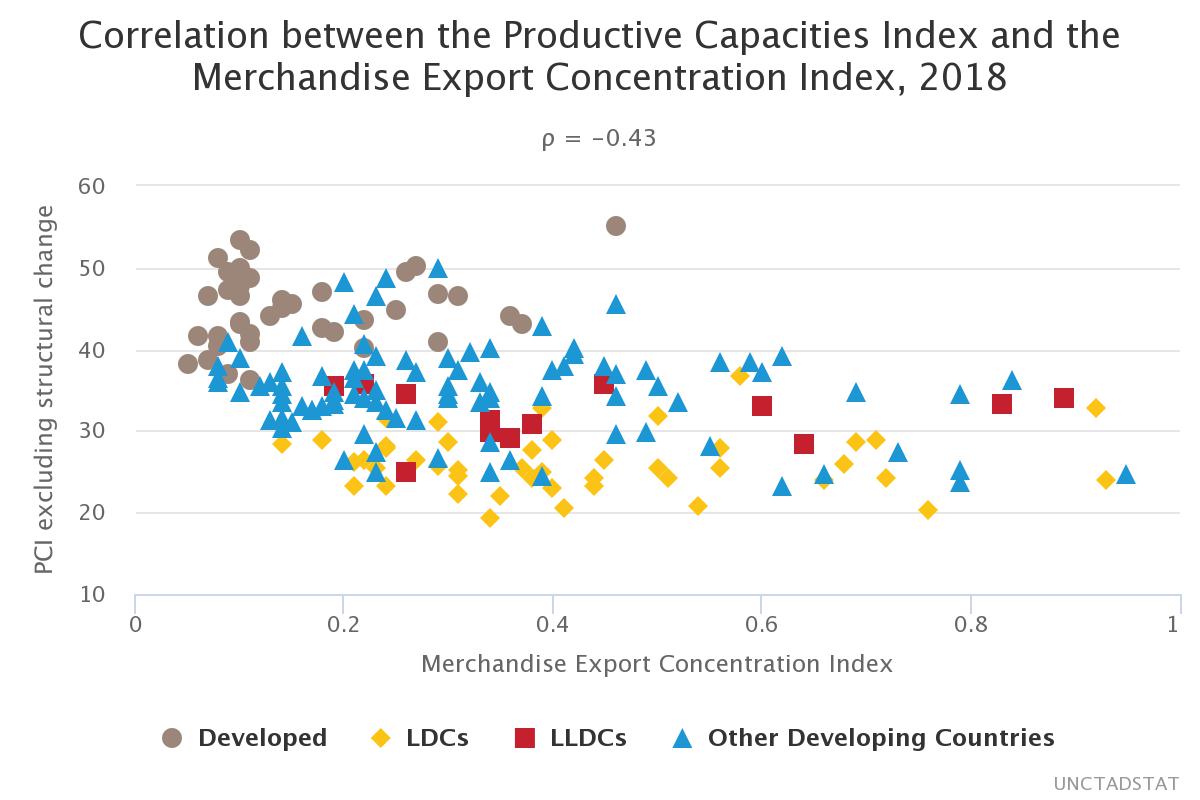 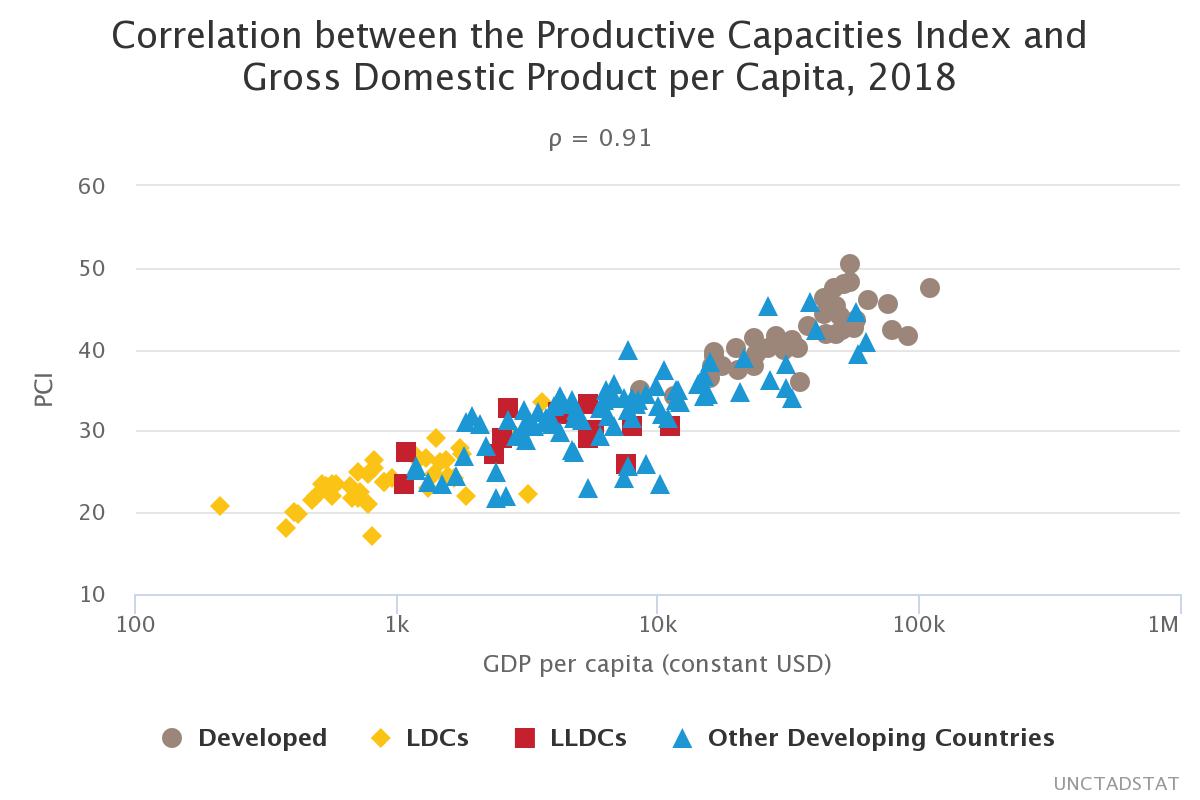 If we examine two of Africa’s top performers, Mauritius ranked 46th of 193 countries and South Africa ranked 74th and two of the Caribbean’s top performers, Barbados ranked 40th and Trinidad and Tobago ranked 48th, we see from Figure 2 below that the better the PCI ranking, the better the selected nations performed in GDP per capita. According to UNCTAD, “this is to be expected, as productive capacities determine the capacity of an economy to produce goods and services.”

*Merchandise Export Concentration Index function on a scale of 0 to 1. The close to zero a country it the more diverse its exports and the close the 1 the less diverse.

While it may appear that Figure 2 does not depict a clear correlation between a better PCI score and greater export diversification on the Merchandise Export Concentration Index, for example, South Africa (74th) has a lower PCI than Mauritius (46th) and Barbados (40th) but a better Merchandise Export Concentration Index score of 0.13, than Mauritius at 0.22 and Barbados at 0.16. However, looks can be deceiving as the correlation is a general one. When all 193 countries are examined, it is clear that generally speaking, a better PCI score lends itself to greater export diversification.

Developing mutual Productive Capacity is, therefore, at the heart of building a successful Economic Engagement Network. For an African-Caribbean Economic Engagement Network to not only emerge but be a success will require great levels of cooperation, coordination and capacity building. A first initial step toward such success would be to capture the data on each side’s series and variety of agreements. Figure 3 below gives a quick snapshot of such an exercise.

But what types of agreements?

Trade and investment policies have been traditionally guided by the concept of increasingly selling goods (and services) in the global marketplace; however, with the rise of global value chains, a new type of thinking is required to reflect current business realities. This new reality is one where the global trading system is based on production and inter-connectivity. Barriers to trade (tariff or non-tariff) or investment, therefore, take on a whole new dimension for policymakers when examined from this angle. The objective of creating an Economic Engagement Network it must be remembered is to attract FDI that facilitates global value chains.

As such, trade is not simply about trade in goods and or services. Instead, the means by which these goods and services are delivered has become of equal importance and has given rise to the ever-blurring lines between trade and investment and between goods and services trade. Therefore, the importance of other types of agreements, inclusive of trade agreements, to an Economic Engagement Network cannot be overstated.

An African-Caribbean Economic Engagement Network is a grand vision of bold design and will not be easy to achieve; however, the fact that it is possible should be cause for optimism.

Ainsley Brown is the Snr Director Regulations, Policy, Monitoring and Enforcement at Jamaica’s Special Economic Zone Authority and an Adjunct Lecturer in Logistics at the Mona School of Business and Management