In this essay I reflect on the question: What do we make of Africa’s States’ sovereignty whose economies have been reordered/structured around imperial relations of domination, whose larger reigns of social coexistence reeks of neoliberalism and whose citizens are always served the short end of the stick in the access or provision of social welfare services? Not to belabour the point, our increasingly datafied lives promising ‘enormous’ economic value require renewed governance, effort and thinking most pertinently from African States lest what we have as statehood is annihilated on the altar of technological imperialism.

The African Sovereign Debt Justice Network brings to you an update of African sovereign debt news and updates on events and happenings on and about Africa that reveal how sovereign debt issues are engaged by the various stakeholders.

This opinion piece aims to ascertain the extent to which the new Bank of Namibia Act 1 of 2020 (the Act) imports the neoliberal rules of central banking and it also assesses the level of departure, if any, from the conventional central bank mandates couched in law. The piece further highlights the domestication of the rules of the Central Bank Model Law adopted by the Southern African Development Community (SADC). 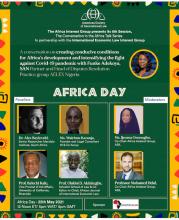 With the looming post-Covid 19 crisis and the potential loss of liquidity in the banking market, the Islamic financial system (internationally known as "Islamic Finance") may provide an alternative to the African banking model for customers and could provide additional ways for domestic banks to finance themselves.