Africa's financial sector is expected to grow exponentially over the next few years; with projections, financial technology services, notably digital credit, are expected to expand to a USD 150 billion business by 2022. However, the rapid proliferation of financial services and products, notably micro-finance and digital credit, has led to a worrying trend of predatory lending practices over the past twenty years. This trend may negatively impact Africa's economic development objectives in the long run, while exploiting its most vulnerable.

While lawmakers have taken measures to restrict predatory lending practices, notably in the updated South African National Credit Act 2016 and the Central Bank of Kenya (Amendment) Bill, 2020; there is evidence that financial law reforms have not gone far enough, highlighting the need for a more robust regional financial regulatory framework.

A large number of digital lenders remain unregulated in Africa. Such lenders can notably escape regulatory requirements to respect interest rate caps and ensure consumer credit assessments and reporting. As there is often no transparency between such micro-financing and digital credit platforms, borrowers may easily become over-indebted. With high-interest rates and credit providers' right to charge discretionary 'facilitation' and 'service' fees, such loans are profitable for lenders, even in the event of default, which has led to their exponential growth over the past fifteen years.

In Kenya, access to digital financial products and services rose from 27% of the population in 2006 to a staggering 83% in just one year following the launch of the M-Pesa (mobile money transfer service) online platform. Since then, the number of online financial platforms has ballooned, with providers offering online money transfer, payment, and micro-financing services. It is currently estimated that there are over fifty different mobile lending platforms operating in Kenya alone.

Regulation of credit products, including digital credit, is challenging for several reasons. First, under common law, credit products are considered a form of contract and, therefore, subject to the doctrine of Freedom of Contract, which presumes an agreement reached between two consenting, rational, and well-informed parties. However, credit consumers are often insufficiently informed before signing up for a credit product. In a Federal Reserve Board study in 2007, many U.S. consumers indicated they did not understand annualized percentage rates (APR). In another survey, 38% surveyed indicated that credit products were 'too complex to understand.'

Second, credit products are continually evolving, meaning financial regulation needs to keep apace of new technological innovations. Inevitably, there is a lag between the arrival of new credit products in the market and the time taken to introduce necessary regulatory reforms to expand the scope of existing laws to encompass these new products. This reality highlights the need for robust, broadly drafted regulatory frameworks that do not fall into the trap of focusing on form over function.

The trend in financial regulation has been to increase the complex methodologies of valuation and risk management on financial institutions and 'regulation by disclosure' measures. These measures increase financial institutions' reporting requirements (form) without addressing the sources of the systemic fault lines in the financial system that have led to severe over-leveraging, risk-taking, and predatory lending practices (substance).

In the wake of the 2008 financial crisis, the  Dodd-Frank Wall Street Reform and Consumer Protection Act was passed by U.S. legislators in 2010. While the Act outlines more robust regulations on credit reporting and valuation methodologies; it also includes ambiguities vis-à-vis statutory rules on disclosure requirements and unfair business practices. The Act establishes a statutory test for 'unfairness' in lending practices but stipulates a consumer must prove that a credit provider has caused 'substantial injury' that was not 'reasonably avoidable.' Furthermore, it specifies that the injury may 'not (be) outweighed by countervailing benefits to consumers or competition' (Section 1031 b).

In Kenya, a hitherto largely unregulated market, many service providers slip through the net of existing consumer protection legislation. Until recently, financial regulation only covered loans provided by prudential companies such as banks, insurance providers, and other registered bodies. However, many digital credit providers, including non-deposit taking cooperatives and micro-credit providers, were not covered by the legislation.

In 2019 it was estimated that in spite of their small size, such small, or 'nano', digital loans may charge compound interest as high as 43%, with borrowers accumulating penalty fees and further accrued interest for late payments. Furthermore, there is evidence that digital credit is increasingly being used to meet basic consumption needs, with up to 35% of digital credit is used for consumption in 2017, including basic household needs. 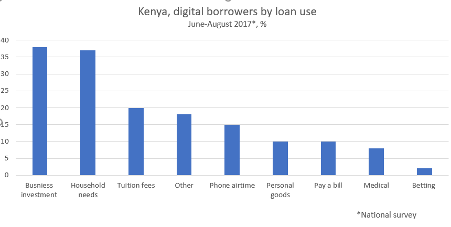 The disastrous consequences of the expansion of unregulated micro-finance in South Africa In addition to the rise in bank lending, there has also been a propagation of microfinance or 'nano-loans', made popular in the 1980s by Nobel-winning economist Muhammad Yunus' Grameen Bank in Bangladesh, which aimed to 'brin(g) capitalism to the poor.' However, the project became increasingly unsustainable for those taking out microloans as it transitioned from a subsidized program to a profit-making model. Interest rates on microloans rapidly rose and, while advertised at 20%, were often as high as 30%. Consequently, many have argued that microfinance has not helped poor communities escape poverty, but instead led them into a cycle of debt, underdevelopment and even greater poverty.

In 2012 it was estimated that of the 19 million credit consumers in South Africa, nearly one half were debt-distressed. In the poor northern province of Rustenberg, the site of a platinum mine owned by a London based operating company Lomnin there were 81 formal microcredit providers for a population of 250,000, some located within the mine premises itself. Many miners took out microloans in response to limited income prospects, rapidly falling into debt. The mine’s main union even became involved in the lending, becoming part-owner of the microloan provider U-Bank. In response, several miners formed a break-off union, the Association of Mineworkers and Construction Union (AMCU), and went on strike in August 2012 to demand Lomnin management increase wages. The miners’ plight drew international attention when the strike ended in disaster when thirty-four of the striking miners were killed.

The existing international financial regulatory framework has several shortfalls. The rapid development of financial technology means that lawmakers must keep pace with technological and regulatory developments to avoid cross-border regulatory arbitrage and consequent exploitation of consumers in less regulated markets.

The Basel Committee on Banking Supervision's updated Basel III recommendations for increased capital and liquidity provisions for international banks was negotiated and ratified by the G20 states (of which South Africa is the sole African member-state) in 2010. However, the updated regulations will only come into effect in January 2022, suggesting financial regulators continue to make concessions to large global financial institutions.

While the current (Agreement Establishing the African Continental Free Trade Area) sets out a Protocol on Trade in Services that includes provisions on financial services and the provision for a 'right to regulate' (Art.8) as well as the need for 'domestic regulation' (Art. 9), African countries should be careful not to apply blanket clauses and provisions that may benefit foreign investors and financial institutions, while putting their own public policy and consumers' rights and needs at risk. In this regard, more specific clauses addressing and regulating predatory lending practices are needed.

African countries are due to begin negotiations on a new African Continental FTA (AfCFTA) Investment Protocol in the coming months. The agreement poses a unique opportunity for African countries to put in place a regulatory continental investment framework that could include - in addition to the much anticipated provisions on investment protection, promotion and facilitation - specific provisions regarding consumer protection and public policy safeguards, including employment and wage evolution for foreign financial institutions. Furthermore, African countries may also seek to create their own regional financial regulatory bodies and include increased capital requirements for banks and more stringent risk valuation measures such as those proposed by the Basel III accord.

Basel III agreement critics have pointed out that it is too complicated and, like most laws regulating the financial sector, is regulated by form rather than function. The 2010 accord includes elaborate capital and risk valuation calculation methodologies designed to enhance risk management and leverage monitoring but still enables 'globally systemically important institutions' (GSIIs) leeway to use their internal valuation models.

The fact that the Dodd-Frank Banking Act (2010) and the Basel III accord (2010) have failed to address the problem of 'too big to fail' institutions and the implicit government bankrolling of highly leveraged high-risk financial institutions has led many to criticize the global financial legislation post-2008. Specifically, many argue that the lack of transparency in valuation and reporting methods allow international financial institutions to use regulatory and fiscal arbitrage to optimize returns for their shareholders while proliferating predatory credit products. Of particular concern are new ventures in less regulated financial markets, such as in Africa.

The Institute for New Economic Thinking has highlighted that global financial regulation needs to go further. At a conference in Paris in 2015, Icelandic financial regulator Gudrun Johnson proposed the use of Return on Assets (ROA) instead of Return on Equity (ROE) as a basis of a performance benchmark for financial institutions. While professor Edward Kane, founding member of the Shadow Financial Regulatory Committee in the U.S., proposed the need for an elite unbiased regulatory body, citing the proximity of existing regulatory bodies’ to the markets and the financial products they regulate as the primary obstacle to effective financial regulation that ensures greater consumer protection.

African countries have an opportunity to ring-fence specific public policy concerns in drafting the new Investment Protocol, particularly in terms of consumer protection and regulatory arbitrage. Furthermore, the AfCFTA Investment Protocol could also include provisions for the creation of independent financial regulatory bodies and greater transparency and reporting requirements on the part of credit providers across the continent to protect consumers.

*Sanam Akram is a financial writer and business consultant with expertise in international finance. She has over ten years' experience working as an analyst with Barclays Private Bank. She holds a Master's degree in Finance and Financial Law from the Centre for Financial and Management Studies at the University of London (SOAS).