Making the Case for the African Continental Free Trade Area

There are compelling reasons that make the case for the African Continental Free Trade Area (AfCFTA).  The main arguments concern population, market potential and dynamism, economies of scale and scope. These are strong impetuses for trade-led diversification away from Africa’s commodity dependence and towards industrial development and structural economic change. The fact that the AfCFTA is win-win for all African countries, good for Africa's women and the attainment of the sustainable development goals (SDGs) makes the case for the AfCFTA  unassailable. The AfCFTA  will cover a market of 1.2 billion people and a gross domestic product (GDP) of $2.5 trillion, across the 55 member States of the African Union. In terms of numbers of participating countries, the AfCFTA will be the world’s largest trade agreement since the formation of the World Trade Organization. 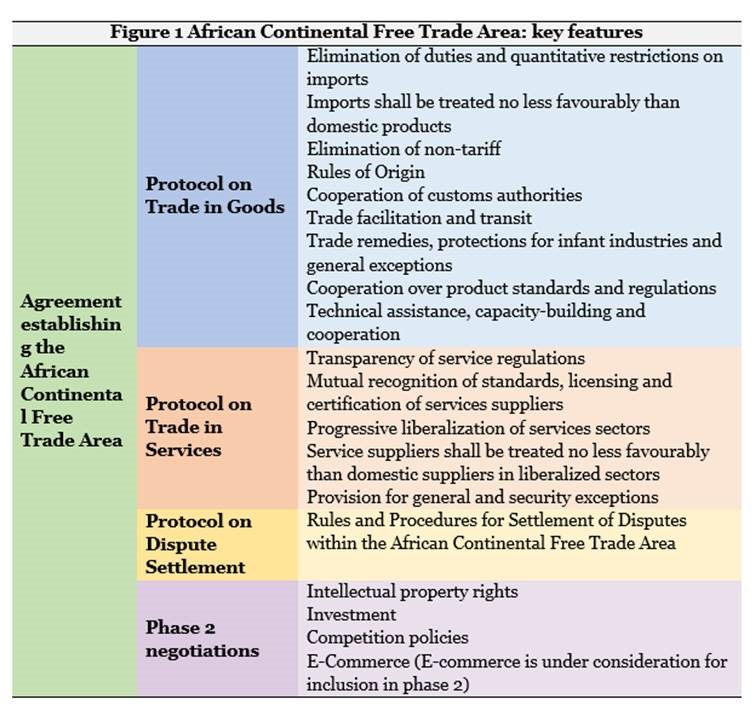 Figure 1 provides an overview of the scope of the Agreement. The African market is also  highly dynamic. The population of Africa is projected to reach 2.5 billion by 2050, at which point it will comprise 26 per cent of what is projected to be the world’s working age population, with an economy that is estimated to grow twice as rapidly as that of the developed world. With average tariffs of 6.1 per cent, businesses currently face higher tariffs when they export within Africa than when they export outside it. The AfCFTA will over a period of 15 years after entry into force progressively eliminate tariffs on intra-African trade, making it easier for African businesses to trade within the continent and cater to and benefit from the growing African market. Consolidating this continent into one trade area provides great opportunities for trading enterprises, businesses and consumers across Africa and the chance to support sustainable development in the world’s least developed region. The UN Economic Commission for Africa (ECA) estimates that the AfCFTA has the potential both to boost intra-African trade by 53.2 per cent by eliminating import duties, and to double this trade if non-tariff barriers are also reduced. Economic modelling at the Commission shows that the AFCFTA is a win-win proposition for all African countries in terms of intra-African Export growth and overall welfare or GDP.

Africa’s industrial exports are forecast to benefit most from the AfCFTA. This is important for diversifying Africa’s trade and encouraging a move away from extractive commodities, such as oil and minerals, which have traditionally accounted for most of Africa’s exports, towards a more balanced and sustainable export base. Over 75 per cent of Africa’s exports outside the continent were extractives from 2012 to 2014, while less than 40 per cent of intra-African trade were extractives in the same period.See figures 2 and 3. 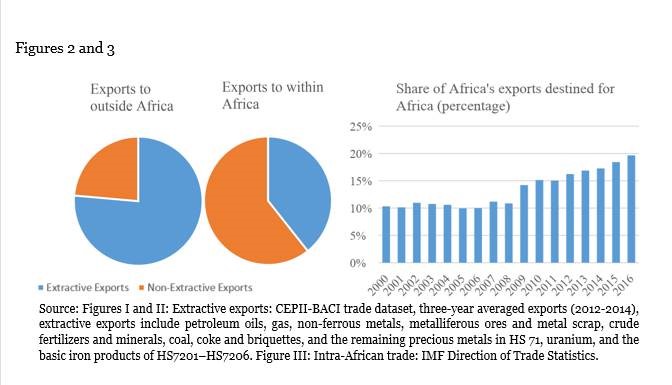 The great risk with products like oil and minerals is their volatility. The fiscal and economic fate of too many African countries relies on the vicissitudes of these product prices. Using the AfCFTA to pivot away from extractive exports will help to secure more sustainable and inclusive trade that is less dependent on the fluctuations of commodity prices. Perhaps most importantly, the AfCFTA will also produce more jobs for Africa’s bulging youth population. This is because extractive exports, on which Africa’s trade is currently based, are less labour-intensive than the manufactures and agricultural goods that will benefit most from AfCFTA. By promoting more labour-intensive trade, the AfCFTA creates more employment. See figures 4, 5 and 6 . 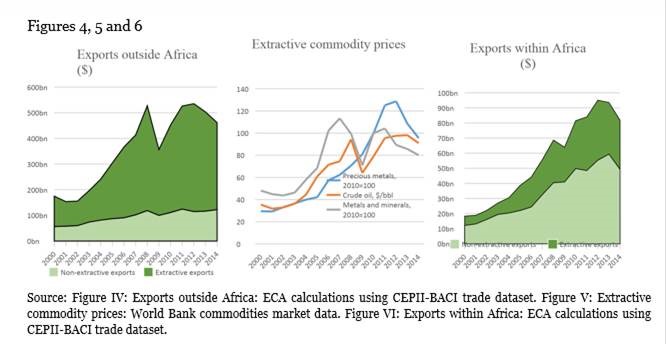 Economies of scale and scope

Small and medium-sized enterprises are key to growth in Africa. They account for around 80 per cent of the region’s businesses. These businesses usually struggle to penetrate more advanced overseas markets. But in a consolidated continental market, they are well positioned to exploit scale economies, tap into continental export destinations and use the continental market as a stepping  stone for expanding into overseas market including through continental supply chains as well as global value chains.  For example, before exporting cars overseas, large automobile manufacturers in South Africa source inputs, including leather for seats from Botswana and fabrics from Lesotho, under the preferential Southern African Customs Union trading regime.

The  AfCFTA is good for Africa’s women

Analyses of the impact of the AfCFTA at the household level suggest that the effect between male and female headed households is broadly quite balanced; both gain by differing degrees in different countries. However, women in particular can benefit from improvements to the challenges they face as informal cross-border traders. Women are estimated to account for around 70 per cent of informal cross-border traders in Africa. When engaged in such an activity, women are particularly vulnerable to harassment, violence, confiscation of goods and even imprisonment. By reducing tariffs, the AfCFTA makes it more affordable for informal traders to operate through formal channels, which offer more protection. This can be further enhanced by simplified trading regimes for small traders, such as the Simplified Trade Regime, (STR), as used in the Common Market for Eastern and Southern Africa (COMESA) and the East African Community, which provides a simplified clearing procedure alongside reduced import duties that provide particular help to small-scale traders.

The AfCFTA is win-win for all African countries

African countries have a diversity of economic configurations and will be affected in different ways by the AfCFTA. Nevertheless, the benefits from the AfCFTA are widespread. While African countries that are relatively more industrialized are well placed to take advantage of the opportunities for manufactured goods, less-industrialized countries can benefit from linking into regional value chains. Regional value chains involve larger industries sourcing their supplies from smaller industries across borders. The AfCFTA makes the formation of regional value chains easier by reducing trade costs and facilitating investment. Agricultural countries can gain from satisfying Africa’s growing food security requirements. The perishable nature of many agricultural food products means that they are particularly responsive to improvements in customs clearance times and logistics that are expected of the AfCFTA. Across the continent, the Consolidated African Agricultural Development Plan (CAADP) provides an essential framework for boosting agricultural productivity and ushering in a green revolution. The majority of African countries are classified as resource rich. Tariffs on raw materials are already low and so the AfCFTA can do little to further promote these exports. However, by lowering intra-African tariffs on intermediates and final goods, the AfCFTA will create additional opportunities for adding value to natural resources and for diversifying into new business areas. The cost of being landlocked includes higher costs of freight and unpredictable transit times. The AfCFTA provides particular benefits to these countries: in addition to reducing tariffs, the AfCFTA is set to include provisions on trade facilitation, transit and customs cooperation. It will nevertheless be vital that the AfCFTA is supported with accompanying measures and policies. Less-industrialized countries can benefit from the implementation of the program for the Accelerated Industrial Development of Africa; domestic investments in education and training can ensure the necessary complementary skills. Implementation of the Africa Mining Vision can complement the AfCFTA, by helping resource-based economies to strategically diversify their exports into other African markets. The Boosting Intra-African Trade (BIAT) Action Plan, an African Union program, is the principal accompanying measure for the AfCFTA. It outlines the areas in which investments are required, such as trade information and access to finance, to ensure that all African countries can benefit from the AfCFTA. These continental policy frameworks will require country level customization as the basis for a coherent AfCFTA national strategy.

The AfCFTA is good for  the SDGs

The AfCFTA is a flagship project of Africa’s Agenda 2063. It was approved by the African Union Summit as an urgent initiative whose immediate implementation would provide quick wins, impact on socio-economic development and enhance confidence and the commitment of Africans as the owners and drivers of Agenda 2063. The cumulative effect of the AfCFTA is to contribute to the achievement of the 2030 Agenda, in particular, to the Sustainable Development Goals, from targets for decent work and economic growth (Goal 8) and the promotion of industry (Goal 9), to food security (Goal 2) and affordable access to health services (Goal 3). By supporting African industrialization and economic development, the AfCFTA can also help to reduce the continent’s reliance on external resources. This would allow Africa to better finance its own development, which is recognized under Goal 17. Of utmost importance, however, is Goal 1 and keeping the pledge that “no one will be left behind… starting with the furthest behind first”. For this, it is crucial that Governments across Africa implement measures to accompany the AfCFTA, such as the African Union’s Boosting Intra-African Trade Action Plan, but also that the African private sector step up to invest in, and take advantage of, the opportunities arising from AfCFTA.

This is the water-tight case for the AfCFTA. It should therefore come as no surprise that 44 of the AU’s 55 member states signed the AfCFTA Agreement at the conclusion  of the negotiations in  Kigali in March 2018. An additional four member states have since signed bringing the total  signatories to 49. There is strong momentum behind the agreement. Twenty-two ratifications are required for its entry into force. By December 2018, 14 countries had ratified with the ratification process quite advanced in another 16 countries. With such strong tail winds, under the guidance of the conference of African Trade Ministers,  the African Union Commission and it’s technical partners including the ECA are actively preparing for a second phase of AFCFTA negotiations. This will cover investment, intellectual property rights, competition policy and possibly e-commerce. With liberalization of trade in services already a part of the AFCFTA Agreement, these ‘behind the border’ arrangements will take the AfCFTA beyond a traditional FTA in goods. The African market is in effect being transformed into a single market for trade in goods and services with common rules and policy frameworks across the phase 2 issues. This will also provide trade policy coherence in the way Africa as a continental market engages with it’s trading partners. Indeed, trade agreements between African as a continental entity an third parties is now envisaged. In its Dispute Settlement Mechanism modelled after the WTO and an inter-governmental trade governance system also drawing inspiration from the institutional arrangements for secretarial support and oversight at the WTO, the  AfCFTA will usher in a new era of certainty, predictability, and the rule of law and  the conduct of trade on the African continent. With the AfCFTA,  trade governance in Africa has entered the 21st century,