Nigeria and International Financial Crime Regulation: Past, Present and the Future

It is often said that ‘you can only connect the dots looking backwards’. Nigeria’s compliance trajectory to the global anti-money laundering and counter-terrorist financing (AML/CFT) standards can be understood through a contextualised analysis of the country’s colonial history and its response to the standards. Indeed, such analysis is critical in projecting the country’s plausible ability to combat money laundering and terrorist financing (ML/TF) adequately.

This essay argues that a correlation exists between Africa’s colonial history and its money laundering occurrences. Yet the global standards adopted to combat this crime do not consider the country’s peculiarities, a catalyst for unintended consequences. This argument is presented in three parts. The first part centers its discussion on the impact of Nigeria’s colonial history on money laundering and the regulation thereof. The second part focuses on the compliance trajectory of Nigeria and argues that the absence of a truly global framework hinders proactive compliance. The final part postulates that Nigeria has differing options to sustain a robust fight against ML/TF and concludes that a suitable outcome warrants the alignment of internal realities with the global standards.

The History of Money Laundering Regulation in Nigeria: A Colonial Perspective

Conversations on the exploitative nature of colonialism centre primarily on slave trade, however, scholars have argued that colonialism’s essential purpose was more sinister. Rodney explained that colonial masters sought ‘to repatriate the profits [from their exploitative activities on Nigeria’s natural resources] to the so-called motherland’. Strategies employed to deprive Nigeria of its resources, even after the 1833 Abolition of Slave Trade Act facilitated the continued laundering of the country’s resources by the colonial masters. Such strategies which included illicit transfers, exorbitant taxation and exclusive rights of exploitation granted to British and European firms over mineral and natural resources were legalized. Arguably, the extent to which ‘legalised laundering’ could be challenged was limited.

Expectedly, Nigeria’s independence was marred with widespread corruption. The ruling class amassed ill-gotten wealth. With political appointments which allowed them to issue licenses and award contracts or scholarships, they exploited their positions to gain kickbacks. To combat these illicit crimes, the disregard for rule of law and lack of accountability, military takeover commenced in 1966 and dominated for about 32 years.[1] Over six military coups were aimed at curbing corruption, albeit unsuccessfully as billions were looted from Nigeria’s coffers by the same military rulers. Arguably, the country’s focus on corruption was myopic in light of large-scale ML particularly through political leaders and drug traffickers.

Ironically, Nigeria’s belated focus on ML/TF was engineered through a neo-colonialist agenda spearheaded by the G7. Recognising the challenge of ML in their economies alongside the increasingly interconnected nature of banking, the G7, through their establishment of the Financial Action Task Force (FATF) in 1989, sought to disseminate their AML/CFT standards globally. The FATF set forty AML/CFT standards which countries are arguably required to comply with. [2] It also has a selective membership body comprised of developed and emerging countries that operates to the exclusion of Nigeria, thereby limiting Nigeria’s ability to contribute towards standards reformulation. In the absence of an institutional ‘voice’ in the FATF’s standards or processes, it is not unsurprising that the resulting framework arguably lacks the nuances that would facilitate Nigeria’s robust compliance.

For instance, Nigeria has since lacked the necessary preconditions for effective AML/CFT regulation such as sturdy AML regulatory, institutional and enforcement frameworks. As a result, certain standards were ill-suited, have paradoxical implications or are transplanted erroneously (a point this paper will explore in more detail in the next section). Nigeria’s implementation of, and compliance with the FATF standards have nevertheless remained low as the series of decrees adopted to tackle ML through financial institutions and drug traffickers[3]had severe limitations. For instance, the 1995 Money Laundering Decree gave financial institutions the discretion to report suspicious transactions and targeted penalties at staff alone, not the institutions thereby creating an atmosphere for compliance laxity. Furthermore, the decree was unclear in its definition of ML and paid limited attention to the physical laundering of cash through airports or seaports, an oversight in a predominantly cash-based economy. Arguably, the decree focused mainly on criminalization and enforcement (breeding a ‘don’t-be-caught’ mentality), not necessarily on prevention. For the FATF, the legislative shortcomings and the limited sanctions against persons/banks for failing to carry out their duties demonstrated a lackadaisical attitude to compliance. Consequently, the FATF blacklisted Nigeria in 2001.

Nigeria recorded history as the first West African country to be blacklisted by the FATF. The FATF’s ‘blacklist’ was, and remains, its enforcement mechanism aimed at publicly ‘naming and shaming’ non-compliant countries with the aim of securing their compliance to its standards. Blacklisting dents a country’s governance reputation and has a series of implications. For instance, development lenders become wary of future dealings with the country, foreign investments become limited and the cost of remittances increases. Furthermore blacklisting hinders correspondent banking relationships given the high regulatory checks required to conduct business with ‘listed countries.’ Indeed, these adversely affected the private sector, disturbed risks views and investment ratings. To get delisted, Nigeria sought to align with the FATF’s standards by legislating on and subsequently institutionalizing structures to combat illicit crimes.

Nigeria enacted a series of laws. It commenced with the Money Laundering (Amendment) Act[4] which expanded the scope of predicate offences and extended AML obligations to other non-financial institutions. Still, the FATF faulted the Act, leading to Money Laundering (Prohibition) Act 2004. The 2004 Act was pedantic in ensuring Nigeria’s delisting from the FATF’s blacklist. It had precise sections that pandered to the FATF’s recommendations. For instance, Nigeria criminalised money laundering and made progress towards implementing adequate procedures to identify and seize terrorist assets. It also included specific sections that limited the amount of cash that private individuals and corporate entities could hold for making payments of five hundred thousand naira (N500,000) and one million naira (N1,000,000) respectively.[5] The Act alongside two notable laws, the Corrupt Practices and Other Offences Act 2000 which sets up the Independent Corrupt Practices and Other Related Offences Commission (ICPC) and the Economic and Financial Crimes Commission (EFCC) Act 2002, facilitated Nigeria’s delisting by 2006.[6]

It is imperative to reiterate that the past set the scene for the present, hence, the extent to which Nigeria’s delisting signalled improved compliance is questionable.

Although the FATF’s blacklist is argued to facilitate compliance by countries, the dichotomy between formal and proactive compliance is scarcely considered. Whilst the former may catalyze compliance with ‘black letter recommendations’, the country may in-fact remain deficient in reality. However, where a country considers the standards legitimate, particularly when its voice is prioritized in the process, it is more inclined to proactively comply. Put simply, external pressure on a country with weak pre-conditions for effective regulation such as enforcement institutions cannot translate to robust AML/CFT regulation, implementation and compliance.

To illustrate Nigeria’s compliance predicament, this paper examined the extent to which 37 other African countries are compliant with the FATF’s 40 recommendations/standards in Figure 1. Available data on Nigeria’s compliance report spanning 2007 through to 2015 reveal weak compliance. Of the 38 countries examined, 30 countries are deemed to be < 50% compliant with the FATF recommendations. Only 7 are deemed to be > 50% compliant. Findings show that Egypt is the highest compliant African country, followed by Tunisia and Mauritius. Liberia, Tanzania, Sierra Leone and Kenya amongst others, record low compliance. Nigeria falls within the bracket of countries with low compliance with a 42% compliance record. Nigeria’s weak compliance is evident in its recent National Risk Assessment (NRA) report which concurs that even in areas where Nigeria has ‘medium high’ or ‘high risk’, there is insufficient legislative/regulatory framework to address the challenge. 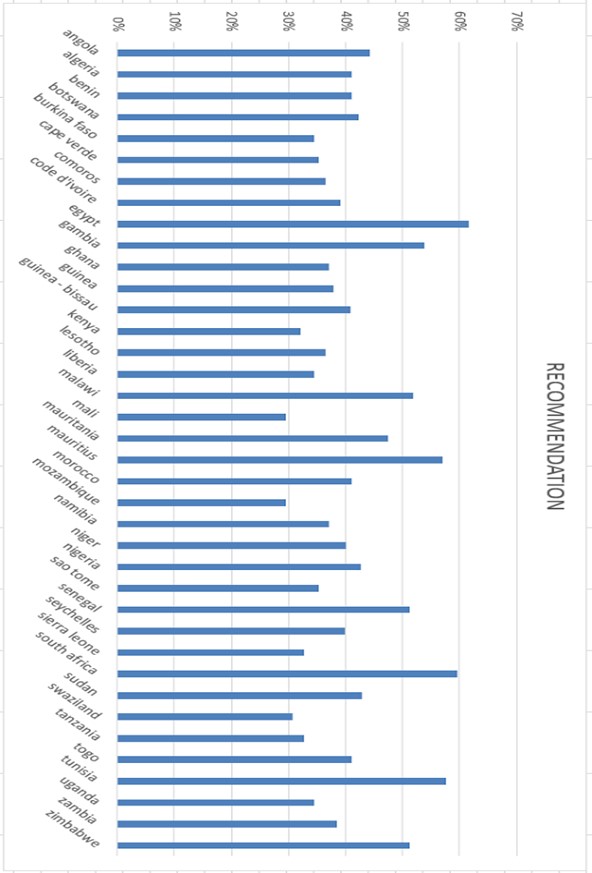 Figure 1. Author’s compilation of Technical Compliance of 38 African countries derived from the FATF’s Mutual Evaluation Reports on each country.

For instance, the NRA highlighted that lawyers pose ‘medium high’ risk for ML, yet there is no framework to checkmate them. On one hand, this can be attributable to blatant disregard for the FATF’s recommendation which mandates the classification of lawyers as designated non-financial businesses and professions. Such classification would require lawyers to engage in client due diligence and suspicious transaction reporting. However, on the other hand, an examination of the red-pencilled legislation revealed that the Nigerian law mandated lawyers to submit every client transaction with a significantly low threshold of £1000 – without any suspicion. Arguably, this attempt at formal compliance circumvents the spirit of the FATF recommendation and undermines legal professional privilege. More so, it demonstrates that transplanted frameworks do not necessarily ‘make the journey’ and may even be done erroneously due to the disparity in understanding and perception.

Another significant challenge that demonstrates the mismatch between the FATF’s global standards and Nigeria’s local realities is the FATF’s requirement on customer due diligence (CDD). The FATF compels banks to engage in CDD by ‘identifying their customers and verifying their customer’s identity using reliable, independent source documents, data or information’. On its face value, this requirement appears logically framed, but a large percentage of Nigerians are excluded from mainstream consumer banking due to lack of acceptable identification documentation primarily driven by illiteracy, unemployment and poverty. Hence, the strict enforcement of CDD only heightens financial exclusion, which is antithetical to the FATF’s financial integrity objective. To resolve this challenge, Nigeria’s Central Bank has issued circulars to ensure that the financially disadvantaged are not shut out from the banking services, yet in practice, there is bare adherence to the circular in a bid to adhere to the FATF standards. This quagmire, which demonstrates continuing formal compliance is not carefully considered in determining Nigeria’s compliance trajectory.

One can argue that Nigeria needs to fix her system to ensure improved compliance. However, what becomes evident is that the FATF has to understand the homegrown challenges that hinder proactive compliance and ensure Nigeria is better able to understand and adopt a stronger risk-based approach. The FATF’s framework as it is, has arguably set Nigeria up to fail.

So far, this paper has demonstrated that a correlation exists between Africa’s history and its socio-economic structures. Africa’s colonial history has catalysed the lack of robust financial institutions, weak enforcement institutions, redundant political will and corruption amongst other ill, which undermine efforts to combat ML/TF.

As things stand, Nigeria has drafted laws with the support of the International Monetary Fund and the World Bank. However, beyond laws which are driven by the need to avert sanctions, Nigeria’s compliance record remains low. Nigeria’s compliance future is however unclear, primarily because the country stands at a crossroads. It is possible that Nigeria may push for a stronger voice to influence global standards to acknowledge its local realities. This is not a far-off reality as the FATF is currently examining the unintended consequences of its standards, although the outcome/implications of this study are still unknown. Indeed, where findings reveal that a more inclusive body may better address the fight against ML/TF, the FATF may allow for a more nuanced approach that considers Nigeria’s, and other developing countries, voice in their processes.

Alternatively, Nigeria may work to improve its preconditions for effective regulation with the hope that this will translate to stronger compliance. However, the country would achieve this with great difficulty given the cross-section of governmental and non-governmental agencies involved, coupled with the vestiges of colonialism which manifest as an ingrained corruption in the system.

The varying approaches are, however, not mutually exclusive. The country ought to improve its regulatory framework to ensure its implementation and compliance with the FATF standards, whilst also pushing for a voice in the FATF’s processes. This would ensure an alignment of global standards with local realities.

[1] A period of civilian rule existed between 1979 and December 1983 under President Shehu Shagari.

[6] The Corrupt Practices and other Related Offences Act 2000 No.5 Laws of the Federation of Nigeria; the Economic and Financial Crimes Commission (Establishment) Act 2002.