Tax Evasion in Latin America and the Caribbean: An Urgent Call for Attention in the Most Unequal Region in the World

The primary objective of this post is to highlight the importance and gravity of the existing tax evasion in Latin America and the Caribbean today. A study conducted by Santiago Diaz de Sarralde Miguez[1] reports that Latin America and the Caribbean are characterized by a relatively low tax burden, which averages 22.8% of GDP. That is 11.5% less than the OECD (2015). While it is true that there are large differences between countries, as the tax burden varies from 12.4% in Guatemala to 38.6% in Cuba.

The region has a greater reliance on indirect taxation (almost 50% of the total) and taxation on corporate income than OECD countries. The study highlights also the smaller share of personal income tax (8.8% of the total versus 24% in OECD) and social security contributions (16.4% versus 26.2% in OECD). The region has a highly unequal income distribution and especially poor redistributive capacity of tax policy. In this regard, the OECD –Gini index of 0.47- is reduced by 36% through the tax policy. However, in LAC, inequality is only reduced by 6% through the tax policy, from a Gini coefficient of 0.5.

Another important feature is the high informality, calculated at 41% compared to 17% in OECD. The work highlights the high evasion, especially in the income tax of legal entities. There is a high impact of the erosion of tax bases and shifting of benefits to avoid taxation. Meanwhile, high tax expenditures are underscored (which represent on average 30% of the potential collection)

In another study by Gomez Sabaini and Moran for ECLAC in 2016[2], it was concluded that tax evasion has been and continues to be one of the main obstacles affecting public finances of countries in the region. Attention was called by saying that there is no institutionalized task of estimating the evasion, with adequate periodicity and publication of the results, in most countries. This was demonstrated because of the scarce and insufficient information available as to the magnitude of the problem. Latinobarometer 2016, an organization that measures various aspects of Latin American reality, emphasizes that the belief that tax evasion is justifiable has recorded steady increases since 2011. In other words, Latin Americans are now more open to tax evasion than 5 years ago. This reflects an oscillating behavior, suggesting that they are sensitive to conditions being experienced by countries or measures taken by governments.

Meanwhile, in the report entitled taxation for an inclusive growth 2016, prepared by ECLAC and OXFAM, concludes that Latin America and the Caribbean show extreme inequality, the proof of this is that in 2014 the richest 10% had amassed 71% of the regional wealth. This situation is confirmed by the analysis of tax data available regarding the personal income in the countries of the region. The study says there are inadequate tax systems totally regressive and high tax evasion and avoidance, costing thousands of dollars that could be invested to combat poverty and inequality. In that document, it is estimated that revenue losses range from 27% to 65% in income tax. The publication suggests various measures to achieve a taxation with inclusive growth, including tax reforms, improving the capacity of tax administrations and efforts to improve information exchange agreements, among other measures.

In the work entitled “Consensus and Conflict in tax policy in Latin America in 2017[3] it was stated that in the last two decades most Latin American countries have increased their tax revenues. A high level of noncompliance is nevertheless observed in most of the taxes in force. It was said that although there is greater social awareness of the seriousness of the problem, the scarcity and dispersion of specific studies on the subject is surprising, which makes difficult to establish accurate diagnoses on the extent of tax noncompliance. It concludes that Latin America remains the most unequal region in the world with a Gini index of 0.52.

OXFAM, for its part in the 2018 report says that between 2002 and 2015 the fortunes of billionaires in Latin America grew by an average of 21% annually. This growth was 6 times higher than the GDP growth experienced in the region. The output of illicit financial flows and capital flight, product of tax evasion, tax avoidance and tax privileges of multinational corporations to pay fewer taxes, are the main challenges facing the region. Meanwhile ECLAC in 2018[4] again stresses the high tax evasion, both domestically and internationally, and the existence of substantial tax expenditures. It says the personal income tax remains the Achilles heel as it only collects 1.8% of GDP compared with 8.4% in OECD countries for the year 2015.

The following measures are said to be key to reducing inequities and achieving inclusive growth in the countries of the region:

In this report it was estimated that tax evasion for 2015 amounted to 2.4% of GDP in VAT and 4.3% of the regional GDP in income tax, which together represented 340 billion dollars and 6.7% of GDP. Regarding the evasion from international operations, the report notes that very little is known. 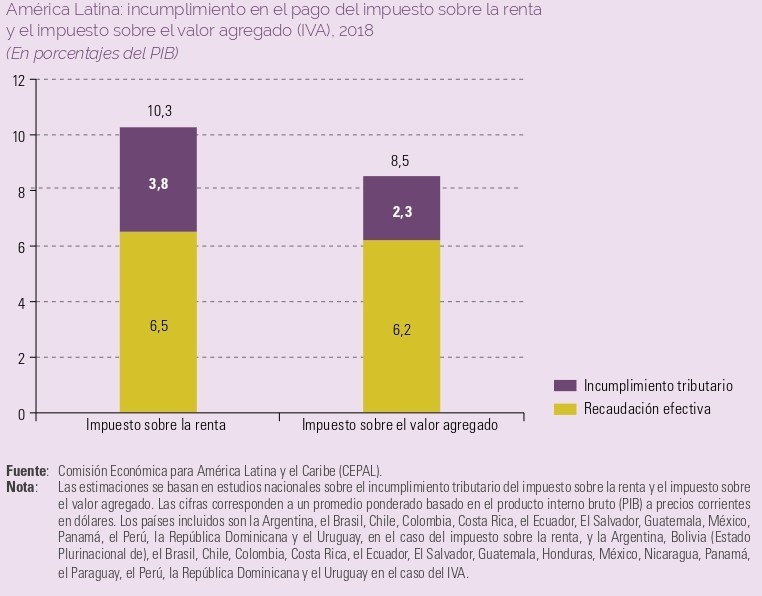 Unfortunately, this information has not seen much variation when compared with the estimate for 2016, in which the total evasion was 6.7% of GDP. Meanwhile, the illicit flows of resulting from international manipulation of trade in goods reached US $ 85 billion in 2016, i.e. 1.5% of the regional GDP. 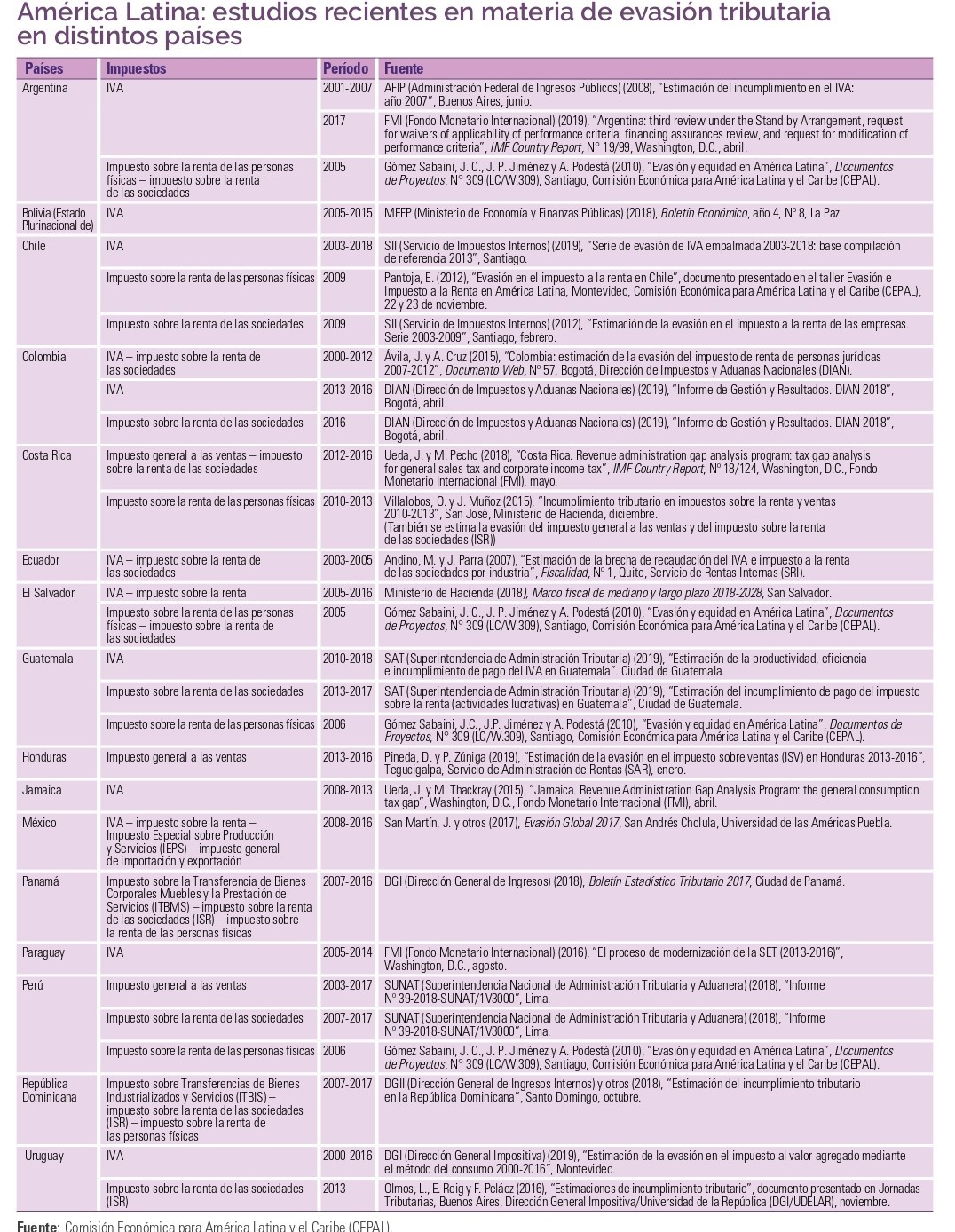 Increasing public revenues is key to strengthening the ability of the tax policy action and support in mobilizing resources to finance the 2030 schedule. ECLAC reiterates the importance of reducing the high level of tax evasion and illicit financial flows to increase the tax space in the region.

Regarding the reduction of inequality through transfers from direct taxes the report notes that Latin America only achieved 4.7% compared to 38% of the OECD, meaning that OECD countries reduce their inequality by 8 times more than LAC, through their tax policy. This is not a minor data and it conclusively means that tax policy is failing to reduce inequalities, or worse – in many cases, it is contributing to their increase.

It will be necessary a national an international aproach.  The National approach includes:

Its vital for the region a comprehensive coherence of the tax system, it is the fundamental basis of financing for the 2030 Agenda for Sustainable Development:

It is very important for every country to be aware of the causes of a phenomenon as complex as tax evasion, since it is the only way to find a strategy for combatting it. The issue is extremely complex, but undoubtedly, it is an exercise, which all countries must undertake.

Tax evasion is a global challenge that requires a global response. International tax cooperation must be part and parcel of a set of effective and well-coordinated multilateral actions to respond to the crisis. In order to expand the fiscal space, it is more urgent than ever to work together to fight tax evasion and tax avoidance, including illicit financial flows. I think international tax cooperation should be scaled up in a way that is universal in approach and scope and fully takes into account the different needs and capacities of all countries.

This article has highlighted the importance of the phenomenon of evasion for the region, which is why all countries should urgently analyze internally the magnitude of the phenomenon, its causes and design state policies to fight it. Latin America is the most unequal region in the world with extreme poverty and informality requires that combating tax evasion be a priority for the region. The road is not easy, but certainly, we have to go through it.

[4] Fiscal Panorama of Latin America and the Caribbean 2018 – ECLAC

[5] Fiscal Panorama of Latin America and the Caribbean 2019 – ECLAC

[6] Fiscal Panorama of Latin America and the Caribbean 2020 – ECLAC.