There is a relationship between Foreign direct investment (FDI) and gender (in)equality. This relationship is premised on two assumptions. The first is that FDI contributes to gender equality, and the second is that FDI may indeed be the shackle to gender equality. The first assumption is more popular than the second as its reality is more visible to the public compared to the second. In evaluating the first assumption, it is undeniable that FDI is one of the factors that contribute to the economic growth of a country as it adds to a country’s capital stock. Studies have shown a positive relation between FDI and the Gender Development Index (GDI). Based on these studies, an inference is drawn that there is an increase in gender equality as a result of more FDI 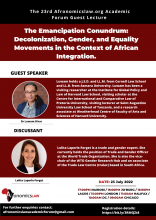 This substantial volume sets out to establish the case for recognition of a new field of law. The editors propose a concept of African Union (AU) law – by analogy with the established body of European Union (EU) law – and argue for the need for such a concept in order to create “a platform to examine legal developments in Africa from an Afrocentric perspective”.

A new economic wisdom seems to be informing the development agenda of international economic institutions, including the World Trade Organisation’s (WTO). The argument is that, although global value chains (GVCs) have existed for a long time, the pace and intensity of global interactions is rapidly changing, consisting of ever more functional ‘fractionalization’ and geographical ‘dispersion’ of production, and so is the nature of trade, with the unprecedented increase in the exchange of components and tasks originating in different parts of the world.

The Agreement Establishing the AfCFTA is far more than just a trade agreement. It embodies long-held aspirations for an integrated Africa which, in the words of Ghana’s first Prime Minister and President, Dr. Kwame Nkrumah, would be better equipped to “tackle hopefully every emergency, every enemy and every complexity.” As one of the flagship projects of the AU’s Agenda 2063, the free trade initiative is envisioned as a pathway to an African renaissance in both economic and cultural terms. According to the United Nations Economic Commission for Africa, the AfCFTA could integrate 55 African Union (AU) member states in a market of about 1.2 billion people with an estimated gross domestic product of US $ 2.5 trillion. Moreover, the area is expected to reflect the continent’s “common identity by celebrating our history and our vibrant culture.”

Uncertainty looms for the Kenyan floriculture industry, as leaders of the East African Community Partner States – apart from Kenya - are stalling the ratification of the 2014 Economic Partnership Agreement with the European Union (EAC-EU EPA). This analysis explains the deadlock in which this industry finds itself.

This essay highlights the traditional, hybrid and private regulation-inspired approaches through which the private sector arguably facilitates the achievement of the SDGs. Private regulation is not a silver bullet in the global quest for sustainable development, considering the inherent legal, administrative, institutional and political concerns. However, seeing the private sector as a partner in rule making and enforcement opens a realm of possibility in terms of possible collaborative models among stakeholders towards achieving the SDGs.