There is the potential to create regional or sub-regional frameworks, which through agreements can handle claims against companies within their territories. This may strengthen local regional capacity, alleviate the allegations of complicity of the state and exemplify the cooperative spirit embodied in more recent collaborative African action. It would demonstrate an attempt at African solutions which are not dependent on home states. Nevertheless, it may not be enough to counter the lack of legally binding responsibility grounded in international law, as it would not be able to bring parent companies, who reside outside the African jurisdiction, within its scope.

This one-day workshop will investigate, discuss, and consider new sustainable avenues to achieve SDGs in the wake of the Covid-19 pandemic. Some of the possible side effects of the pandemic will be felt on the actualisation of the sustainable development goals (SDGs) especially in developing countries especially as the UK government has announced cuts to foreign aid. 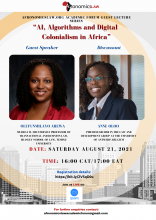 This multidisciplinary conference explores these and various other disparate practices with a view to developing a systematic understanding of the ways in which African actors seek to shape, challenge, and advance the knowledge, rules, and practice on sanctions. This involves uncovering and situating African perspectives, concerns and practices within, and vis-à-vis, the broader debate on sanctions in global governance.

On July 1, 2021, the Organization for Economic Cooperation and Development (OECD) secured the votes of 130 members out of 139 members of the Inclusive Framework, on a two-pillar plan to reform the global tax rules. Notably, two African countries—Kenya and Nigeria—, active members of the Inclusive Framework withheld their support for this plan, which has been described by many as “historic”. Nigeria is a major economic force in West Africa and the largest economy, by GDP, on the African continent. Kenya is East Africa’s gateway and the region’s largest economy. What must have influenced their decisions not to support a historic global tax reform, and what are the consequences of such action? 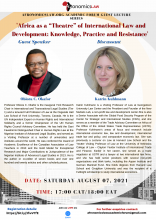 Africa as a “Theatre” of International Law and Development: Knowledge, Practice and Resistance

The AEA-Prelim Training and Competition 2021 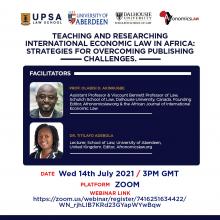 International economic law is an emerging area of teaching, research, and practice in Africa. The area, which is a sub-field of international law, is concerned with the regulation of economic relations between states as well as the conduct of private parties involved in cross-border economic and business transactions.