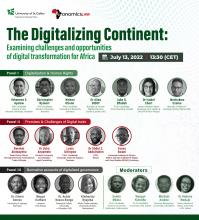 This Workshop, hosted by the Competence Center for African Research (CCAR), University of St.Gallen jointly with the Afronomicslaw.org, seeks to examine the ongoing effort towards digital transformation, and particularly E-Commerce.

The organising committee invites the submission of abstracts (max. 300 words) or full papers (max.5000 words) from researchers and practitioners in the fields of international trade, development, finance and investment. All abstracts should be formatted to facilitate the review process.

On Saturday, 10 April 2021, Olabisi D. Akinkugbe delivered the 8th Lecture in the ongoing Guest Lecture Series of the Afronomicslaw Academic Forum. The title of Professor Akinkugbe’s presentation was “The African Continental Free Trade Area in the Shadow of Contending Visions of Pan-Africanism.” The Lecture was based on his forthcoming book chapter entitled “A Critical Appraisal of the African Continental Free Trade Area Agreement.” Prof. Akinkugbe’s main argument was that although the AfCFTA has been referred to as a pan-African trade agreement, it is unclear what that means since pan-Africanism is subject to different interpretations.

The contributions to the symposium on the Regional Comprehensive Economic Partnership (RCEP) feature essays from across the world. The topics are diverse too: some dwell on the geopolitical implications of the RCEP, some dwell on its dispute settlement chapter, while some others on issues which the text of the Agreement either ignores or deals with only perfunctorily. Despite the divergence of the views of the contributors, on some points, they broadly tend to agree. They clearly perceive the RCEP as the beginning of a growing trend where economies in the Asia-Pacific region could play a much more pivotal rule in global trade rulemaking.