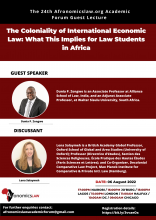 It is terrifyingly sobering to consider that Hugo Grotius, historiographically considered, acting out a fundamentally TWAILian charge. Yes, he was not simply a young lawyer writing legal opinions. In fact, his point of view can be better appreciated when one considers that the supremely arrogant Treaty of Tordesillas had purported to share the world’s oceans between Spain and Portugal – Prof Anghie during the lecture chuckled at the ridiculous assertion of a certain property right to sea routes, once discovered. I dare say, the same will repeat with space routes in the not too distant future.

On a Saturday evening in Singapore in March 2022 – or as is in these days of webinars, evening, afternoon, morning as wherever one is on this fragile third rock from the Sun - Prof Anthony Anghie cheekily – yes, there’s a delightful cheekiness in his voice as one does when they know they intend to remind the Emperor of his nakedness – describes his critique of the eurocentric narrative of the foundation of international law by asking his audience to contemplate a few visual images that exemplify this narrative.

Apart from important recent examples that will be formative, we believe it is long past time for international economic law to take stock of its hidden heritage (including settler colonialism) and how this ongoing legacy invariably intersects with IEL’s impoverished notions of economy, as well as its impoverishing approach to migration.

In our book, we tried to explain the circumstances in which this politico-monetary arrangement was created, how it works, what changes it has undergone, what purposes it serves, what benefits France derives from it, and how it handicaps the development of African countries that use it. While tracing the long history of repression against African political leaders and intellectuals who strove for the monetary liberation of French-speaking Africa, we have not forgotten to mention the recent movements on the continent and in its diaspora that are calling for the end of the CFA franc. Faced with the criticism that the opponents of the CFA franc have no serious alternative to propose, we show that African economists such as the Franco-Egyptian Samir Amin, the Senegalese Mamadou Diarra and the Cameroonian Joseph Tchundjang Pouemi, among others, had outlined different options for leaving this colonial device from the end of the 1960s, that is to say, well before the formulation from 1983 of a single currency project for West Africa.

The laws of the international trading regimes are crafted, not by Africans, but by economists and policymakers in the Global North, with the interest of the elites of the Global North at the heart of any prescriptions. That is why neoliberalism and the “free market” is sold as the panacea for Africa’s developmental impasse.

I propose that it is our current and future battles that will determine the meaning and impact of decolonisation in Africa and beyond. As things stand now, the dead are certainly not safe. Let me elaborate on this claim drawing from Professor Taylor’s work: his piece draws from the classics of Third Worldist Marxism and dependency theory to provide a sober account of Africa’s nominally post-colonial present.

In this essay, I argue for centering systemic racism in the study of international law. This is neither an original method nor argument when applied to legal education. Teaching law with a focus on context—systemic racism for example—has a long tradition.

It is high time that pedagogical, methodological, ethical, and sociological challenges of this nature are discussed and addressed if IL is to be assessed for what it is without plummeting into the depths of myriad situated perspectives, colonialism, linguistic barriers, paucity of resources, and sheer divisions within the academic world.