In the globalised world that we inhabit, replete with its complex private transnational institutions and multinational corporations, energy law is often far from “national”. That is to say, hard legal problems arising in relation to energy issues within a particular country will often have a remarkably international character that can substantially transcend the immediate jurisdictional confines of the country in question.

This essay reviews the book co-edited by Logan Cochrane and Nathan Andrews, The Transnational Land Rush in Africa: A Decade After the Spike. The book has three parts, in addition to the introduction and concluding chapter. The first part, Part I contain four chapters under the theme, The Land-Development Nexus: Grand Discourses, Social Injustice and Contestations. The second part, Part II encompass three chapter under Informality and ‘New’ Customary Land Tenure Landscapes theme. The third part, Part III contain two chapters under the Formalization, Domestic Agency and Legacies of Legal Pluralism theme. This review focuses on the book's third part, which includes studies from Ethiopia and the Democratic Republic of the Congo.

Following the global financial crisis of 2007-08, which overlapped with a global food security crisis, the global land rush emerged as a key phenomenon that has since become the metonymic expression of the global response to these crises. Cochrane’s and Andrews’ The Transnational Land Rush in Africa: A Decade After the Spike provides a timely and necessary update of the land rush “a decade after the 2007/08 commodity price spike.” The book addresses some of the major misconceptions about the land rush on the African continent and, especially, the Eurocentric coverage of the land rush in Africa within the international political economy discourse by attending to local, national, and transnational land grabs and actors that have been largely marginalized in these debates. 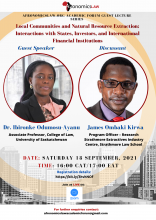 The COVID-19 pandemic has exposed the weaknesses of the current patterns of production and consumption, exemplified by GVCs and the global trade and investment order in which they operate. These fragilities have resulted in the aforementioned social, economic and financial crises but what they represent most of all, is a crisis of responsibility in which powerful actors, state and private, that have been the main beneficiaries of GVCs, have failed to discharge their ethical and normative obligations to those most vulnerable within their production and supply chains. To this end, a new approach is sorely needed to address the vulnerabilities of a global economy built on fragile GVC governance that serves as new nodes of global inequality and precarity.

The current attention to sustainability challenges in Nigeria presents a good opportunity for policy makers to review the extant company legislation in Nigeria and incorporate CSR provisions suitable to the nation’s cultural and economic context. The aim of CSR regulation is to use the market economy to finance and achieve sustainable development. The purpose of the company should be redefined to serve all the constituents, not only the community, but also employees, customers and investors.

The interconnectedness of commercial and other mundane human transactions has never been more reified than it is since the advent of new Information and Communication Technologies (ICTs). However, it bears observing that ICTs have helped in harnessing virtually every human and non-human endeavour into their commercial ramifications

Coal extraction is a lucrative industry in Colombia for the transnational corporations operating in the country. One of the most aggressive projects against local communities today is the Cerrejon coal mine in la Guajira, which has been a site for large-scale coal extraction since 1970. In 1976 the Colombian government signed a contract with Intercor (a subsidiary of Exxon) to explore, exploit and commercialize the Northern Zone. Under this agreement, both the exploitation and commercialization of coal would have a duration of 23 years, from which both the mine and the railroad, the port, the buildings, other properties, contracts and fixed assets that are necessary for the development of the business would return to Carbocol, a state-owned enterprise.

The newly-formed International Economic Law Collective has already brought something new to how we understand economic thought in international law. Compared to other groups in international law, the Collective is distinct because it places the concept of equality as both an analytical focal point in the work its members produce and as a main feature of how the group organizes itself.

Food security is at the very core of human existence. Agriculture is thus a critical part of sustainable development. It is estimated that Agriculture contributes about 33% of the world’s gross-domestic product. A significant number of countries with the most arable land belong to the categorization of low to middle income nations, while a significant number of the high-income nations are dependent on food imports from the former. As a result, domestic and foreign agricultural land investment contracts are common as countries seek to achieve food security. The UNIDROIT/FAO/IFAD Legal Guide to Agricultural Land Investment Contracts (ALIC) is thus a welcome framework for ensuring that these investments contribute to the sustainable development goals. On the overall, the legal guide provides comprehensive instrument that effectively highlights the critical components of such agricultural land contracts and is thus commendable.