The Columbia Center on Sustainable Investment (CCSI) is seeking a Legal or Policy Researcher and a Senior Legal Researcher to work on our Land, Agriculture & Food Systems portfolio of projects. 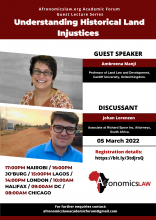 The volume's contribution do well in facilitating the reader's understanding of the broad range of legal and practical intricacies of land reform and land rights, including chapters that examine commercial incentives for land vis-a-vis the security of rural land rights (Chapter 4 by Lorenzo Cotula), shifting policy paradigm (Chapter 7 by Howard Stein) property transfer taxes (Chapter 8 by Riel Franzsen), and the role of women in land reform (Chapter 11 by Eugene Chigbu) among other topics.

Developing a policy framework with a view to improving the governance of land within the continent must prioritize tenure reform by recognizing and mainstreaming communal/indigenous/customary land rights. This departure from the initial obtaining policy approach that focused on titling and conversion of customary to modern tenure is critical for sustainable land reform in Africa as argued by Lorenzo Cotulla and Clarke. Rethinking land reform in Africa new ideas, opportunities and challenges assesses the progress that has been made in land policy reform in the continent within the decade that the Framework and Guidelines have been in place. It also explores opportunities and challenges as well as new frontiers in the land reform discourse. Importantly, one of the themes explored in the book is communal land tenure.

This short piece argues that while these arguments may hold sway, host African states continue to have primary responsibility and should rise to their obligation to protect human rights of impacted communities against the harmful effects of TNCs’ activities. Moreover, the controversies surrounding the extraterritorial jurisdiction of states and the silence of international law regarding enforceable obligation on TNCs demonstrate the difficulty in embracing the newer approaches regarding the roles of home states and TNCs.